Coseismic and Postseismic Deformation of the 2016 Mw 6.6 Aketao Earthquake from InSAR Observations and Modelling

Abstract: On November 25, 2016, the Mw 6.6 Aketao earthquakeoccurred in Xinjiang, western China. We used thecombination of ascending Sentinel-1A, descending Sentinel-1Band ascending ALOS-2 PALSAR data to measure the coseismicdeformation. The line-of-sight (LOS) coseismic deformationimplies that the earthquake was dominated by right-lateral strikeslip.Ignoring the fault-perpendicular deformation, the fault-paralleland up–down deformation was extracted based on the combinationof Sentinel-1A and 1B observations. Results show that the maximumfault-parallel deformation is * 13.7 cm at the north wall andthe minimum is * -16.5 cm at the south wall of the Muji fault.Then, coseismic slip distribution was derived using the steepestdescent method (SDM) based on a single-segment fault modelusing the three InSAR LOS observations as constraints. The slipdistribution reveals two slip centers. The maximum slip of theeastern center is 0.5 m at a depth of 8.8 km, where the rake angleis * 181.2 [1]. The maximum slip of the western center is 0.6 m at adepth of 10.8 km, where the rake angle is * 181.1 [1]. The derivedseismic moment obtained equals the Mw 6.6 earthquake. In thisstudy, postseismic deformation time series in 1.5 years after theearthquake were retrieved from 26 multi-temporal Sentinel-1descending scenes. The postseismic LOS deformation at the northand south walls of Muji fault both increases with time but inopposite directions. The cumulative deformation is 60–80 mm atthe north wall, and –30 to -20 mm at the south wall. The postseismicdeformation shows similar patterns with the coseismicdeformation, and has the same mechanism. There is no obviouslock at the unbroken gap. Figure 8. Slip distribution modeling results. (a) Trade-off curve between misfit and slip roughness. The preferred smoothing factor used in our inversion is 0.10. (b) Fault slip distribution of Aketao earthquake. Arrow represents the slip direction of each patch.

Figure 10 Post-seismic deformation time series. The first panel is the reference LOS deformation map of the first SAR data acquisition after the earthquake. 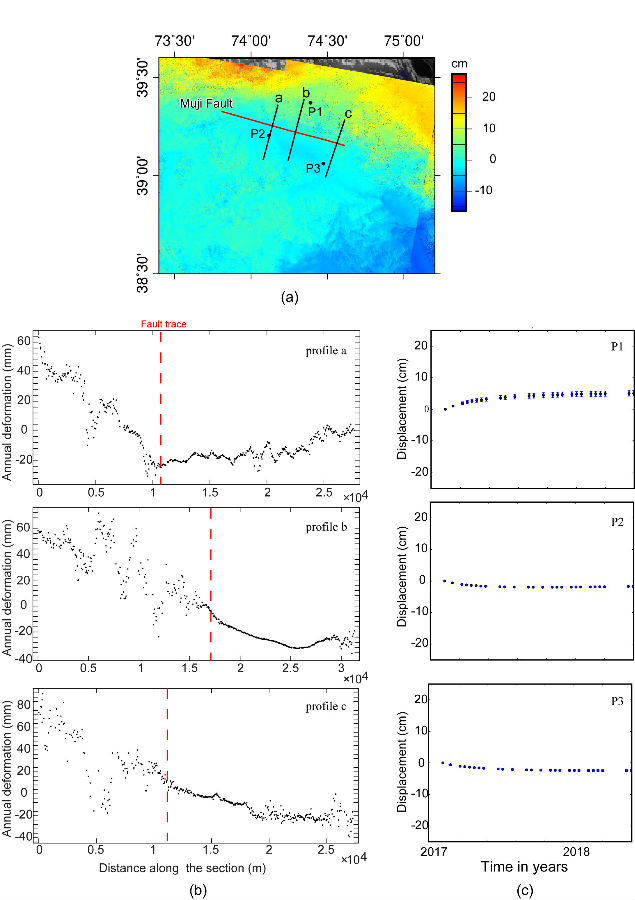